I knew a guy that used to joke about the Christmas letters people write.  He found it funny that these letters were either chalk-full of the amazing things people did all year or it was a laundry list of their woes.  At the time, I laughed along and said to myself, “that’s so true.”

That was all way before Facebook where this sort of external showcasing of your life is now so commonplace.  But even after a decade of change spurred on by social media’s entrenchment in our lives, I remember the meaning behind his joke: our lives are more complex than our accomplishments and they can be more joyful than our woes might tell.  You don't just have a great year or a bad year - it's almost always a mixture of both.

Even knowing that it’s impossible to capture the essence of an entire year in a single letter or blog post I find that here on the brink of Christmas, at the end of the year, I wanted to write something about 2016.  If I followed the Christmas letter theme, I’d start with January and work my way through the seasons.  But I think life is most often remembered in reverse, like a movie watched while the tape is rewound.

December:  It’s been colder than normal.  We’ve had lots and lots of rain this year which is good.  We need it after years of drought.  I spent a lot of time on the couch, under heated blankets, falling asleep too early in the evening.  We didn’t drive around the neighborhood and look at Christmas lights as much as last year.  The season seemed to sneak up on me and I felt like I missed things that should have been important.  We did spend one magical weekend at Disneyland where I felt blessed to be able to afford a trip like that, blessed to have a daughter just the right age to love the trip.  Blessed to have a wife that knew I needed a little magic and happiness in my life.

November: Felt like a hard month for me in ways I wasn't quite prepared for or expecting.  It’s supposed to be a time of Thanksgiving but I felt cheated.  Looking back I can see that I let myself withdraw from life more than I should have.  I kind of closed up and went into hibernation.

October: I can’t even tell you about this month.  Looking at my calendar I can see it was a busy month at work and I know we did the whole Halloween thing.  But the month, in general, is just a blur.

September: Just a few months after celebrating his graduation from the Royal Canadian Mounties program, my nephew sent us a picture of himself and his girlfriend on the top of a mountain and she was wearing a huge diamond ring on her finger.  The whole family was thrilled and we can't wait to get back together and celebrate something so joyful as a wedding.

August: Hot and miserable in Northern California as per normal.  August is also the time when our kids head back to school.  My daughter started 3rd grade this August.  As with most milestones in her life, I found myself dwelling on the swift passage of time with a mix of nostalgia and excitement for the future.  We picked her up from school and went out for ice cream that afternoon.  I remember wanting to share pictures from that day with my mom who felt so far away to me.

July: At the end of July we took a long-planned-for trip to Boston to see the Red Sox play a couple games and do the touristy things.  It was a welcome distraction for me and I loved getting to show the ladies in my life the city on the other coast that I love so much.

Earlier in July, we flew back to my home state of Washington and met the rest of my family for the funeral.

June: On a night at the end of June I left work and saw that I had two missed phone calls on my cell.  One was from my brother-in-law and one was from my step-dad.  I instinctively knew why they were calling so I didn’t want to call them back.  Not yet.  The longer I waited, the longer I could ignore what they had to tell me.

A little while later we sat close together on the couch and told Bailey that her Grandma had died.

May: We took a quick trip to Portland, Oregon.  I managed to blog about it and post some pictures well after the fact.  My daughter got her ears pierced on this trip.  We were trying to carry on with life and do normal things.

April: I finished building a raised-bed vegetable garden I had wanted to build for months.  April in Sacramento is beautiful.  I proudly sent my mom photos of my garden’s progress.  She loved to garden and loved that I loved to garden.  Every time she came to visit, she’d spend time reading a book in a chair in my garden.  I felt a surge of pride whenever I thought she was enjoying herself in the gardens I worked so hard to create.

March: Mom called and told me she had been diagnosed with breast cancer but not to worry because they caught it early and her prognosis was good.  I cried that night.  I’m not used to good outcomes when it comes to cancer.  I sat down that night and wrote her a long text message and told her that I was sad but also thankful for her and for the things she taught me, did for me, sacrificed for me, and cultivated in me.  She wrote back and I saved a screen shot of what she sent because I knew I would want to remember her words. 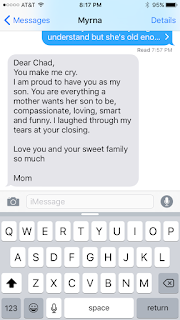 February: We went to Hawaii for the first time ever and had a wonderful trip.  Life was beautiful and good and we felt so lucky to be alive and to see such a different and beautiful part of the world.  We went to a luau one night and watched the sun set into the Pacific ocean while someone nearby blew into a Pu shell to signify the end of the day.  It was glorious.

Email ThisBlogThis!Share to TwitterShare to FacebookShare to Pinterest
Labels: Christmas, Gardening with Children, Memories, Why I Garden

Chad B
Sacramento, CA, United States
I've been gardening in Sacramento, California's Mediterranean climate for over 10 years but I still have much to learn. This blog chronicles the lessons I learn in the garden and how they intersect with the larger themes of my life.

Feel free to e-mail me at MeSoThornyBlog@gmail.com.